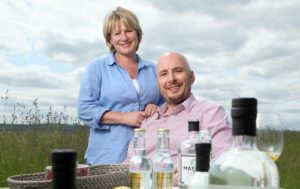 The increasingly popular Masons Gin announced a further expansion during August, as a brand new copper still was introduced to the distillery in Bedale. Hailing from Portugal, the 300 litre gin maker will stand alongside Steve (the current still) and assist in coping with the growing demand for Masons products, a range which, since its expansion in June, now consists of the classic Masons Yorkshire gin, two limited edition flavours in lavender and Yorkshire tea, and a Masons Yorkshire vodka.

In order to celebrate their new edition, Masons are holding a competition to name the still, which can be either a brother or a sister to Steve, and is completely free to enter. Submissions should include the name suggestion along with a reason why, and should be sent via email to the brand’s ambassador, Sarah. In addition to the honour of naming the new still, the winner will also receive a bottle of Masons Gin in an edition of their choice – so over 18’s only please!

The competition will close on the 30th September, and the winner will be announced soon after.

Entries should be sent to: sarah@masonsyorkshiregin.com and should include a full name and contact details.