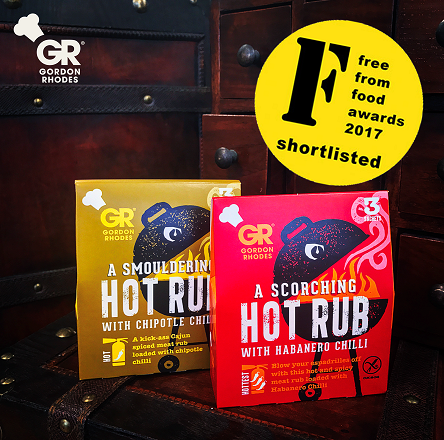 A West Yorkshire company are celebrating after being shortlisted in the 2017 FreeFrom Food Awards.

Bradford based Gordon Rhodes, who produce a range of sauce mixes, rubs and stuffings, have been nominated for Best Store Cupboard Product for both their Gluten Free Smouldering Hot Rub with Chipotle Chilli and Gluten Free Scorching Hot Rub with Habanero Chilli at the prestigious event.

The FreeFrom Food Awards, now in their 10th year, are the industry’s only award that celebrate producers with exemplary products that are free from certain ingredients, including gluten, dairy, nut, soya and other major allergens.

Both shortlisted products have specifically developed to be suitable for customers requiring gluten free products and are perfect for spicing up a wide variety of meat, fish and vegetable dishes.

Claudia Bennewitz, Marketing and Communications Manager at Gordon Rhodes said: “We’re extremely proud to have been shortlisted for this fantastic award. Our Wicked Hot Rubs are not only gluten free, but incredibly versatile, which opens up a whole new world of menu options for those who are unable to eat gluten. Having this much menu choice from one product is rare and is something we are incredibly passionate about”.

Michelle Berriedale-Johnson, the awards director said, “The standard of the entries just keeps on getting better year on year and is often now so good that ‘free from’ foods are often the first choice for foodies who, a few years ago, would not have given them the time of day!”

The winners of the 2017 FreeFrom Food Awards will be announced at an awards ceremony hosted by Antony Worrall Thompson in London on March 28th.