Almost a decade after Driffield’s Wold Top Brewery brewed a pale ale to celebrate the 25th anniversary of the Yorkshire Wolds Way, it has signed a three year deal for Wolds Way to be the official beer of the 79 mile trail that runs from Hessle to Filey. 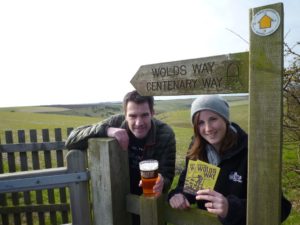 Brewery accounts manager, Kate Balchin said: “We are delighted to support the Yorkshire Wolds Way National Trail that passes within 1.3km of the brewery. It is a beautiful trail with some amazing views and we’re very fortunate to have it on our doorstep.”

Wolds Way is an award winning pale ale that is brewed from home grown Maris Otter malt, Goldings and Cascade hops and the farm based brewery’s own pure, chalk-filtered water. It has a refreshing fruity top note and an ABV of 4% and is available now on draught in pubs along the trail and in limited edition 500ml bottle which will be available direct from the brewery shop and website, and from selected local retailers from May.

The Yorkshire Wolds Way opened in 1982 and is one of 16 National Trails throughout the UK. It was the tenth National Trail to be launched by the Countryside Commission (now Natural England) and now enjoys over 78,000 visits every year.