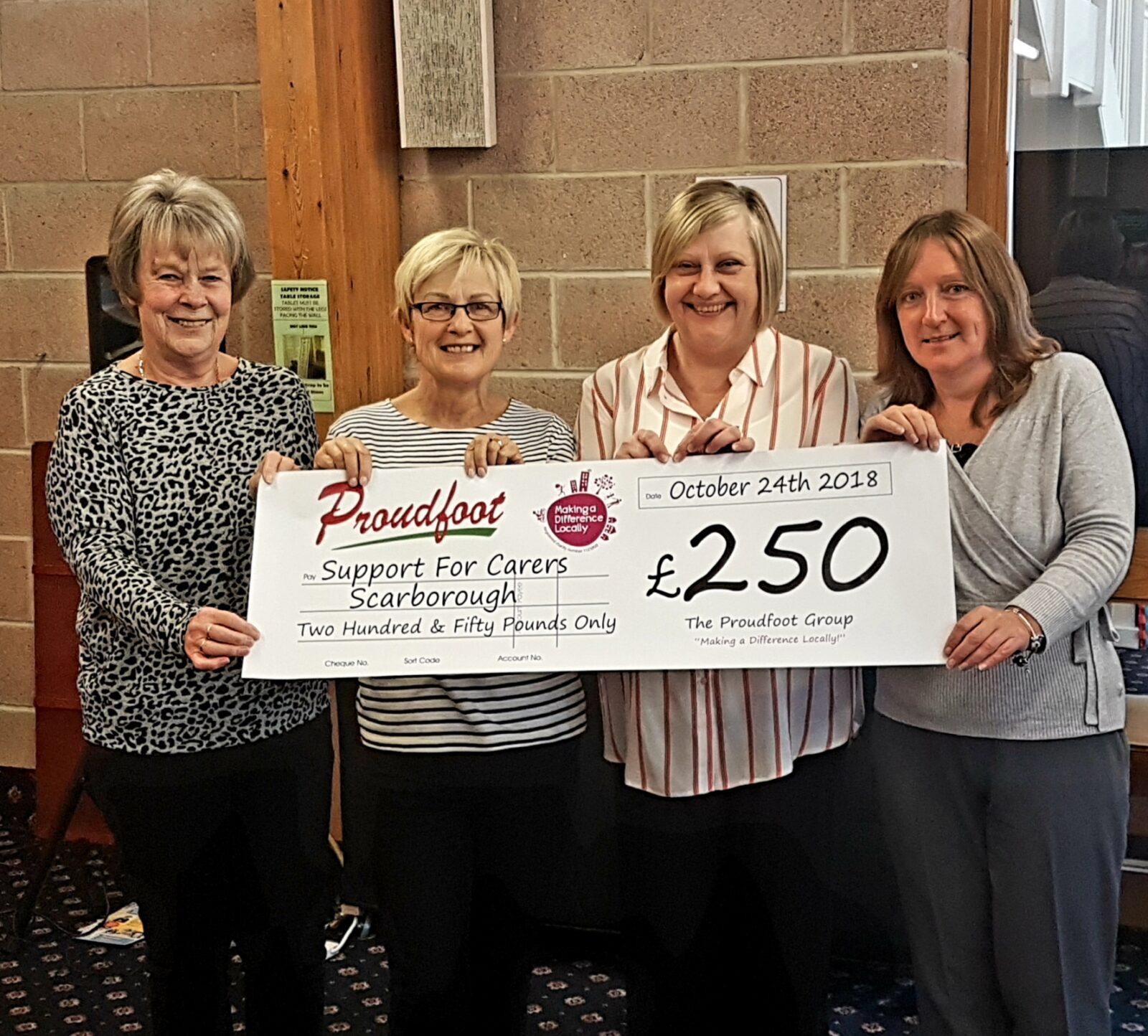 The sale of 5p carrier bags in Proudfoot Group’s stores has raised £2,500 for Support for Carers Scarborough which provides services lonely or isolated older people in the area..

The funds, which were raised in the four Proudfoot supermarkets, based in Newby, Eastfield, Seamer and Manham Hill, over the last few months and will support the charity which provides a sitting service for carers and a befriending service for older people across Scarborough, Filey and the surrounding villages.

Shirley Lumb, Manager at Support For Carers Scarborough, said: “Unfortunately the service has had to be reduced to a telephone call service from staff and volunteers until Covid restrictions are lifted and along with many other small charities, we have been unable to do any fundraising in the past year, which is a vital part of how we are able to help carry on the work we do.

“Some of the £2,500 donation will be spent on enabling us to buy tablets so people can be connected with their volunteer “face to face” as it were or connect with family members who are unable to visit.

“We cannot thank Proudfoot enough for choosing us as one of the local charities they are supporting this year, this will make a huge difference to us.”

The Proudfoot Group will support four local causes over the next year with proceeds raised through the carrier bag charge in its stores. The stores have been raising money on a voluntary basis for good causes in this way since the introduction of the 5p carrier bag charge in 2015 and have donated around £60,000 from the funds raised to charities and other community groups in the area.

Valerie Aston, director at the Proudfoot Group, added: “As people have increasingly become more mindful of their environmental impact, the purchasing of carrier bags in our stores has dropped dramatically in recent years; by approximately 80%.

“However we are delighted to be able to support local causes such as this with the remaining funds raised and I am personally thrilled with the amount we are able to give to this fantastic group as a result.

“We have had so much great feedback from customers who were pleased to offer 5p for a carrier bag, knowing that the funds would be going to such a worthy and much-loved local charity.”

In addition to the tens of thousands raised through the carrier bag charge to date, Proudfoot stores have supported local causes with more than £82,000 in donations raised through Nisa’s Making a Difference Locally charity.