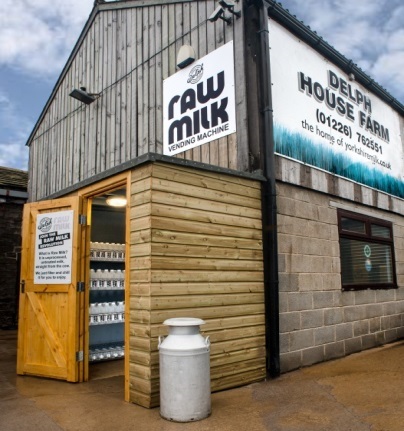 Pick up a bottle of unpasteurised milk from Delph House Farm near Huddersfield and you can enjoy milk as fresh as it comes – straight from cow to vending machine! 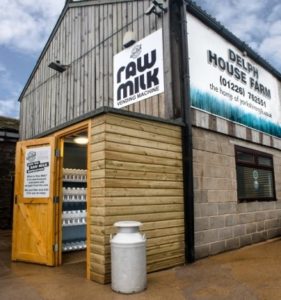 Dairy farmer Jeremy Holmes has installed a unique raw milk vending machine, which allows customers to fill a bottle straight from the farm, from as little as four hours after the cows have been milked.

Collected daily from 110 Friesians at the farm near Denby Dale, it’s not only the milk that’s been flowing freely – a steady stream of raw milk fans has also been making the pilgrimage to the farm gate for their one or two litre containers of dreamy dairy.

Unavailable in the supermarkets, Delph House Farm is one of only a handful of farms in the country where a vending machine has been installed to store the morning fresh milk perfectly. 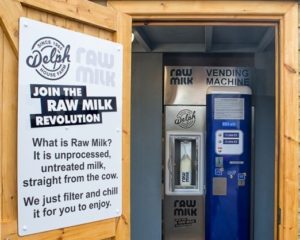 “We’ve had unprecedented interest in the vending machine, with people from all walks of life coming to visit us,” says Jeremy, whose family has been farming at Delph House Farm for three generations. “There’s older people who say it tastes just like the milk of their youth, fitness fans with specialist diets, and others who have told us it has helped deal with allergies and food intolerances.”

In light of the current crisis in dairy farming and its falling milk prices, Jeremy and wife Louise say the vending machine has helped them innovate in a difficult market. While only a small fraction of the farm’s milk is currently served through the vending machine – with the lion’s share pasteurised and sold into the food processing industry and the farm’s more famous sister company, the award-winning Yummy Yorkshire – it has also allowed the Holmes to take control of their own milk price.

“We needed to figure out how we could make more from our milk and get a fair price,” says Jeremy. “And we’re passionate about giving consumers more choice.”