In the run up to the EU Referendum, one Yorkshire brewery has taken a somewhat more light hearted approach to the topic by creating a pair of new beers to gauge opinion on the topic. 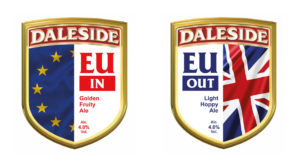 Harrogate based Daleside Brewery are launching “EU In” or “EU Out” in a bit to find out which proves most popular with their customers.

To support the launch the brewery will post the results weekly on Friday’s through social media, culminating on announcing the overall winner on 22nd June.

Business Development Manager, Vincent Staunton said “We are extremely proud about the quality of the beers that we brew and this; somewhat tongue in cheek contest will provide our customers with the opportunity to give us some feedback into the style of beer that they prefer”

“Pubs and social clubs are the hub of the community and as such are the perfect place to promote discussion and debate. We anticipate that the “Daleside Beer Poll” will become a hot topic with beer drinkers in the area and hopefully prove a good insight into the outcome of the vote.”

As part of the roll out earlier this month pubs were encouraged to take both beers and have them on the bar at the same time to see which one proved to be the most popular. The results of the Battle of the Beers will be gathered over the coming weeks and published weekly on Daleside’s Facebook page with the final result announced on 22nd June.