With the world famous Yorkshire forced rhubarb season now well underway, it’s time for one West Yorkshire based producer to spring into action for their busy annual production window. 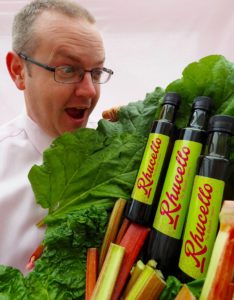 Rhucello, the brain child of David Burnley from Wakefield, produce rhubarb liqueur using the famous Yorkshire vegetable and since its experimental beginnings in 2012, the business has gone from strength to strength.

Gaining a loyal following of enthusiasts, the tipple which is produced within the Yorkshire Rhubarb Triangle was originally dreamt up on a stag party in Amsterdam, when a group of friends from West Yorkshire visited a famous Dutch liqueur house and joked that they couldn’t find one made with their much loved local produce.

“What started off as a joke between friends has grown into a successful business,” said David, Rhucello’s founder.  “We’re now stocked in a number of farm shops and independent retailers throughout the region and after a very busy 2016 we’re increasing the number of shows and events that we’re attending this year – starting off with our local one, the Wakefield Rhubarb Festival in February.”

The annual 3 day festival held in Wakefield town center on 17th– 19th February is a celebration of the region’s well-known produce and will feature an array of local food and drink producers.