A social enterprise project which aims to reduce food waste has partnered up with a North Yorkshire brewery to produce its unique beer.

Hambleton Ales, based in Melmerby near Ripon have started producing a unique beer on behalf of Toast, an organisation founded in London in 2015 by author and campaigner Tristram Stuart to help tackle food waste from the bakery industry. 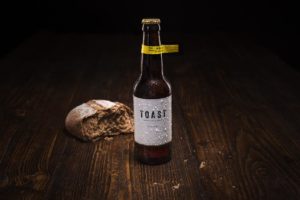 With 44% of all bread produced in the UK thrown away, Toast have developed a beer brewed using this surplus to help reduce food waste and raise awareness of the problem.

Initially developed with the team at Hackney Brewery in London, production has now been moved to North Yorkshire, with bread sourced from bakeries in the region.

Amongst the 15 million tonnes of food waste produced in the UK, bread is the worst offender with some 24 million slices disposed of by households each year.

To date, 2.3 tonnes of bread, which would otherwise have been disposed of, has been used to brew over 26,000 litres of Toast beer, with at least one slice being used per bottle.

All the profits from the project are donated to Feedback, a charity that campaigns to eliminate food waste globally.

Tristram Stuart, Toast’s founder said: “We are thrilled to partner with Hambleton Ales who have helped us develop the Toast business in our first year.  The project is a great way to raise awareness of the food waste issues and offer a positive and easy way to be part of solution.  Our aim is ultimately to be put out of business by eliminating bread waste altogether.”

Toast is available to buy on line at www.toastale.com and in selected stockists throughout the UK with plans to distribute more widely Yorkshire over coming months.