A Huddersfield based catering company are celebrating after being awarded a second contract to run a new café in only its second year of trading. 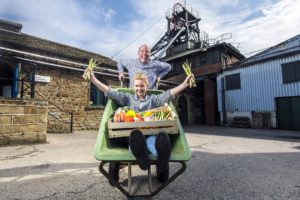 Award winning Catering, which runs the catering at the National Coal Mining Museum for England, will now also run the new café at Pontefract Castle.

The company, which has a commitment to using locally sourced produce and employing locally based staff, will start trading from the new visitor centre at the café in September.

Director and founder of Asparagus Green, Anthony Hegney, said: “This is a great opportunity for us and we are delighted to be part of such a great project at Pontefract Castle which will see the opening of a purpose built café on site. We will be focusing on the best of Yorkshire produce and of course with a hint of liquorice wherever possible.”

Anthony, who has 27 year’s experience in the catering and hospitality industry, is currently working on the menu for the launch of the new venture and is keeping it under wraps for the time being. However, he revealed it would have a very strong local theme using tried and tested local suppliers. “We don’t consider suppliers from outside the Yorkshire region or large companies as we believe in staying local and supporting small businesses,” he added.

The café is part of the £3.5 million Key to the North project at Pontefract Castle, funded by the Heritage Lottery Fund, Historic England, the Council, the Wolfson Foundation and EpaC.

The work will result in the monument being removed from the At Risk register, new paths and landscaping around the site and a new visitor centre and café.

Cllr Les Shaw, Wakefield Council’s portfolio holder for Culture, Leisure and Sport, said: “The Council is delighted to have procured such a first class, local partner for the new café at Pontefract Castle. It is important that we have a café that enhances the visitor experience and wants people to come back for more and I’m confident that that is something Asparagus Green can achieve.”

The new contract comes hot on the heels of a busy few months for Asparagus Green who were voted New Business of the Year 2016 in the Wakefield Business Awards in June and were named as finalists in this year’s Welcome to Yorkshire White Rose Awards.