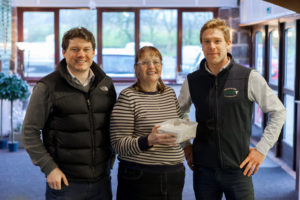 Five budding ice cream enthusiasts have been battling it out to be in with the chance of winning a year’s supply of Yorkshire ice cream and to be crowned Brymor Ice Cream’s 2015 Flavour Guru.

After running a ‘Golden Ticket’ competition through social media which asked the public to submit flavour ideas to Brymor’s Flavour team, 5 lucky people were shortlisted and invited behind the scenes at the famous ice cream producers, who are the company in Yorkshire to make their product exclusively with Guernsey milk, to make their idea a reality!

After being given a full tour of the purpose built dairy and manufacturing plant at their High Jervaulx base near Masham by Dairy Manager, John Adamson, the lucky 5 got busy preparing their ingredients.

“The idea was that their creations were very much their own so they were left to decide if they had the right balance of ingredients and flavours before putting their concoctions into a small batch freezer used for product development” said  James Ashford, Brymor’s Marketing & Business Development Manager.

The shortlisted flavours included Wensleydale & Ginger Cheesecake, Chilli Chocolate, Caramel & Treacle Toffee, Chocolate Cream Eggs & Malteasers, and Peanut Butter Chocolate Swirl and the five newly created concoctions were judged by the Brymor flavour team along with Luke Shaw of the Yorkshire’s Regional Food Group deliciouslyorkshire who had the tough task of deciding who should be crowned champion.

James said “All the flavours exceeded our expectations and we loved the creativity of some of the entries! There were, however two stand-out flavours for our team, the Wensleydale & Ginger Cheesecake and Peanut Butter Chocolate Swirl which were both delicious.”

After much deliberating the judges made the unanimous decision that Jayne Brown’s Peanut Butter Chocolate Swirl, with its perfect balance of flavour and crunchiness, was the stand-out flavour – winning Jayne a year’s supply of ice cream!

All 5 of the shortlisted flavours will be available for free tastings at Brymor’s Ice Cream Parlour from 5th December and if they prove to be as popular with the public as with the judges one of the flavours may just become Brymor’s next great creation!