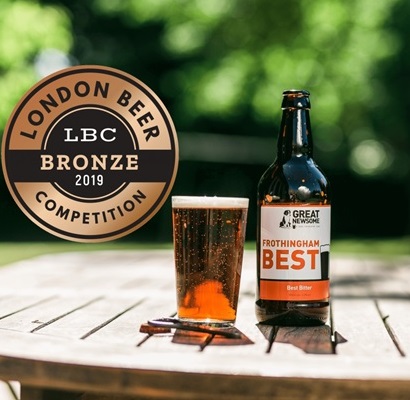 The team at East Yorkshire based Great Newsome Brewery are celebrating after being acknowledged at the highly prestigious national beer competition.

Frothingham Best was awarded a bronze medal at the London Beer Competition which recognises not only taste but also value and packaging.

This is the first time the family run brewery have entered the awards and the newest accolade makes Frothingham Best one of their most decorated beers having previously won World Beer Awards in 2013, 2014 and 2018.

Director Matthew Hodgson said: “This medal is recognition for all of the hard work that the team put into every beer brewed here. Any award that is judged by our peers, beer writers and sommeliers means a great deal to us all”.

“We are all thrilled because for a small business like ours in rural Yorkshire awards like this help us gain much needed exposure both nationally and internationally”.

He added, “The London Beer Competition is quickly gaining a reputation for recognising excellent beer which inspired us to enter for the first time this year. To receive any medal in this competition is tough as it attracts entrants from all over the world”.

The judging panel consisted of beer industry experts from across commercial buying aspects to ensure that all the beers selected as winners were exactly the types favoured by both the beer trade and the end consumer. Beers were judged on the basis of three primary criteria – quality, value and packaging and scored on a 100-point scale. Frothingham Best is available as both a cask and bottle beer and is available throughout the region and to buy online at www.greatnewsomebrewery.co.uk