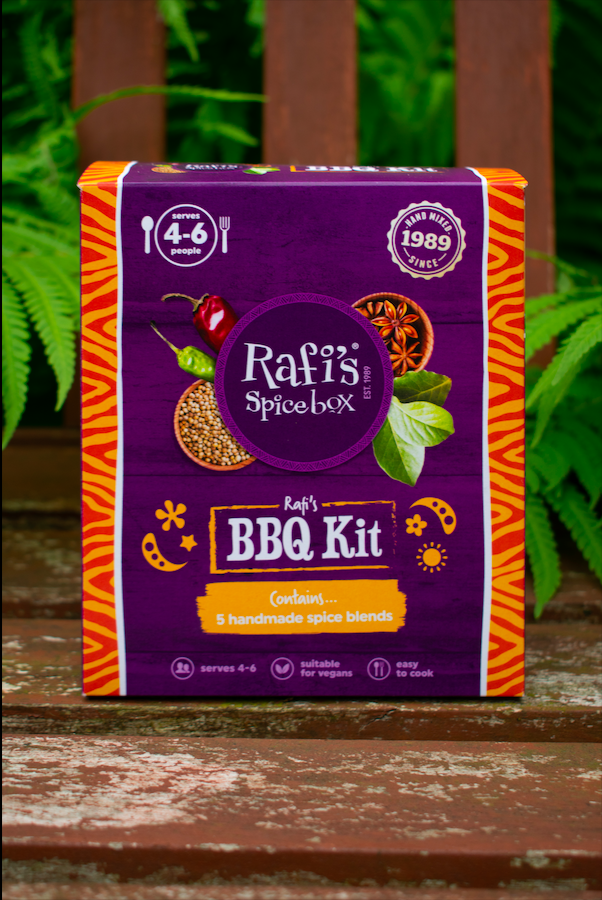 Family-run Rafi’s Spicebox have launched their latest barbeque kit in a bid to get people eating Indian food in different ways.

The award-winning business, who focus on creating healthy, fragrant and colourful flavour combinations have designed the new kit to give an Indian twist to the traditional British summer time favourite and includes five different hand blended spice mixes created by their expert team.

All the BBQ dishes, which can also easily be cooked in the kitchen under the grill include: Rafi’s Tandoori Masala, a simple marinade for chicken or veg, Rafi’s Kebab Masala to make incredible spiced burgers, Rafi’s Bombay Potato Salad Pack, Rafi’s Carrot Salad Spices and Rafi’s Corn on the Cob with Chaat Masala which can rubbed on barbequed of grilled corn for a delicious spicy twist on a summertime classic.

Rafi’s Spicebox is owned by brothers Kevin and Lee Fernandez, who inherited their flair for delicious Indian cuisine from their mother Rafi Fernandez, who started the business in 1989.   Initially opening her first shop selling handmade Curry Packs in Suffolk, Rafi’s has since grown into four more independent stores, including shops in both York and Harrogate, as well as a number of concession stands in partnership with Fenwick Food Hall in Newcastle and selected BOOTHS supermarkets throughout the North of England.  The team also run a mail order website delivering Curry Packs all over the world and to over 50 stockists around the UK.

Owner Kevin said: “Breaking down the barriers of cooking Indian food is our priority and introducing new flavours and textures to people’s every day palette is something we continually strive to achieve. We’re delighted to be able to encourage our customers to share in our passion with our new BBQ Kit which we hope will inspire everyone to continue to introduce tantalising Indian flavours into their cooking.”

Each kit contains full recipes along with lots of helpful tips and ideas for different ways to incorporate them into your home cooking.

Rafi’s BBQ Kit is available at Rafi’s Spicebox stores in York and Harrogate as well as at Booths in Ilkley and online via their website www.spicebox.co.uk