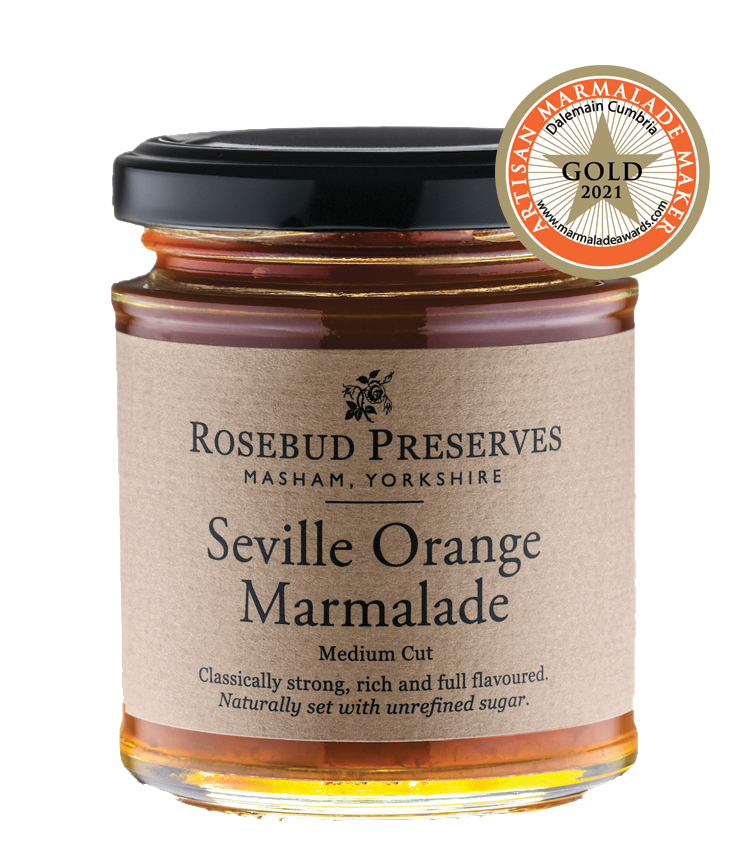 Masham based Rosebud Preserves are celebrating after being awarded a prestigious Gold at the 2021 World Original Marmalade Awards.

Now in their 15th year, the awards, which are held at Dalemain House in Cumbria attract thousands of entries from across the world.  Rosebud, who were first awarded a Gold back in 2018, were the only Yorkshire based fine food producer to be given the sought after top spot this year, taking home the medal for their Seville Orange Marmalade.

Owner of Rosebud Preserves Elspeth Biltoft said: “We were so thrilled to win Gold for a second time for our Seville Orange Marmalade, especially as it is a global competition with many highly skilled makers entering their products.

“This was one of the very first preserves I made when I started the company in 1989 and since then it has frequently topped our best seller list and has proved to be enduringly popular with our customers.

“Classically strong, rich and full flavoured with a naturally set, we source the fruit to make our delicious marmalade from one grower based in the heart of Andalucía in Southern Spain. Their orchards have supplied us with Seville oranges for over 25 years, as the quality of their produce is excellent. The same family has been running the business for over three generations.

“The beauty of these Seville oranges is in their unique sweet bitterness, which imparts a superb flavour to our marmalade. The composition of the soil in which they are grown adds to the special balance of sweet/sour and the organic cultivation preserves the aroma and purity of the fruit.”

Entries for this year’s awards were sent from marmalade makers from as far afield as Australia, Canada, Japan and the Czech Republic highlighting that quality marmalade is loved not only in Britain, but throughout the rest of the world as well.

Jane Hasell-McCosh, founder of the Awards, said: “The Awards bring such happiness to thousands of people every year, and even though we clearly couldn’t run our Festival as usual, it seemed so important to continue with the competition which creates such a wonderful sense of community all around the world, as well as giving people something fun and creative to do during a difficult time.”

Rosebud’s range of traditionally made, award-winning jams, marmalades, chutneys and jellies are produced at Healy in North Yorkshire and stocked at farm shops and fine food retailers throughout the country.  For more information and to buy online visit www.rosebudpreserves.co.uk.