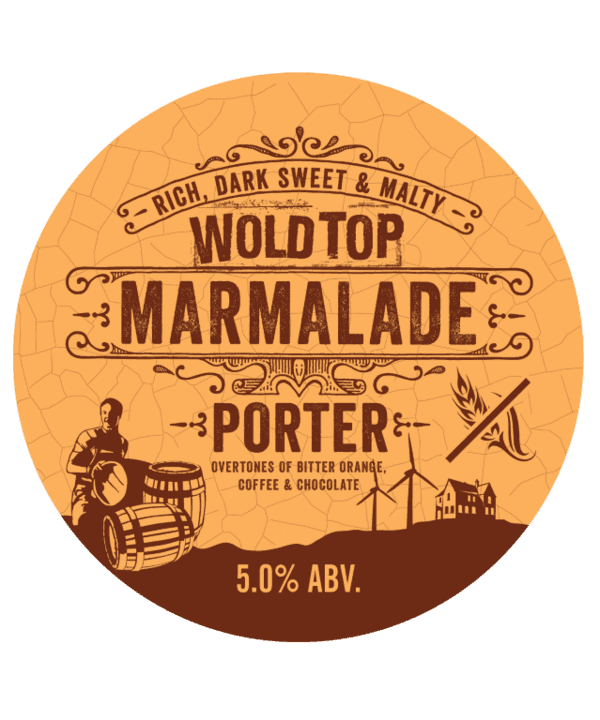 A Yorkshire coast brewery is launching a gluten free cask beer as part of its seasonal offering of limited edition beers.

Wold Top Brewery’s multi award winning gluten free beer Marmalade Porter (5% ABV) is the first of two cask beers that will be available exclusively to pubs and restaurants throughout Yorkshire and will be followed by Hera, the first of the brewery’s Greek Mythology inspired beers.

Wold Top’s Brewery Manager, Alex Balchin said: “Described as ‘A really good porter’ by the judges of the 2018 Great Taste Awards, who awarded it two gold stars, Marmalade Porter is a complex rich dark porter with a sweet malty base, overtones of bitter orange and hints of coffee and chocolate.

“It also won a Bronze award at the SIBA regional keg awards in the Keg Porters, Stouts, Old Ales, Strong Milds and Strong Brown Ales category 2018 and took third place in the World Gluten Free Beers 2018 in the below 5.5% ABV category.

“It has a very strong following in bottles, but is not often available as a cask beer, so we’re expecting that it will be in great demand.”

Hera (4% ABV), a brand new beer that is named after the Queen of Olympus and the wife of Zeus, is a dark beer with a deep red hue and complex malt flavours. Hera is the first of six Greek inspired limited edition cask beers that will be available throughout 2019.