A Yorkshire Dales gin distillery are expanding their capacity to keep up with the demand of their award winning tipple. 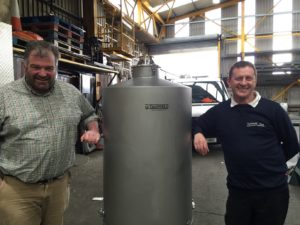 Whittakers Gin, based near Dacre Banks has proved so popular since its launch last summer that Toby and Jane, the husband and wife team behind the brand have enlisted the skills of local fabricators to replicate their famous stills Jezabel 1 and 2!

Jane said: “Due to demand, we quickly had to review our production levels.  Our original still came from America but it was going to take 6 months to get another one shipped over.  We were also really concerned that if we changed anything, maybe the taste of our product would change.  Having bumped into a friend at a dinner party who has an engineering company in America, he suggested that we design our own and maybe try a Yorkshire company to produce the still.”

The Whittaker’s were put in touch with Tadweld Ltd in Tadcaster who are fabricators to the brewing industry in the famous Yorkshire brewing town.

Jane continued: “Armed with our drawings and Jezebel 1, we met with Paul Bullock at Tadweld Ltd and Yorkshire’s first still, Jezebel 3 was born!   We loved the idea of using a Yorkshire manufacturer to make the still and especially as Tadcaster is home to so many great Yorkshire breweries.”

The 360 litre still has now tripled production at the distillery with her American sisters Jezebel 1 and 2 continuing to be used for experimentation and development.

Since their launch in July 2015 Whittaker’s have been named by the Metro amongst their ‘10 British Gins you Should be Drinking list, won 2nd prize in the Craft Distilling Expo Best European Gin 2015, won a Bronze medal for their bottle design at the Harpers Global Design Awards and named Fortnum and Mason’s spirit of the month for November.