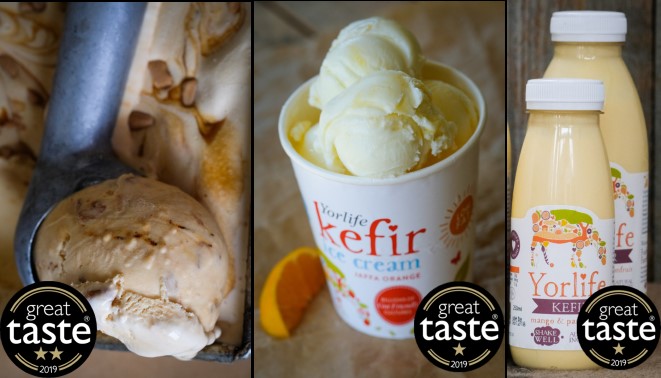 York based ice cream producers Yorvale are celebrating after being awarded a number of coveted Great Taste awards.

Great Taste, known as the Oscars of the food and drink industry awarded the family run company one star for both their mango and passionfruit and Jaffa Orange kefir ice cream and 2 stars for their ever popular Sea Salted Caramel Ice cream, which the judging panel described as having ‘really good almost ‘burnt’ notes and just enough to add a touch of excitement to the palate.’

The Awards which cover a huge variety of categories from companies worldwide received nearly 13,000 entries this year which were whittled down by a panel of some 500 experts including food critics, chefs, cooks, restaurateurs, buyers, retailers and producers.

Widely acknowledged as the most respected food accreditation scheme for artisan and speciality food producers, the stars are a badge of honour, and act as a signpost to fantastic tasting products.

Established in 1989 by husband and wife Lesley and Ian Button, Yorvale use milk from their own herd to produce their award-winning range.

Director of Yorvale Lesley explains: We’re absolutely thrilled with our Great Taste awards this year.  We work really hard to keep developing and producing delicious products and to have them recognised by such a prestigious body as the Great Taste is a wonderful achievement and tops off a great summer of accolades for Yorvale.”

Yorvale’s range of award-winning products are available at farm shops and independent retailers throughout the region.  For more information visit www.yorvale.co.uk