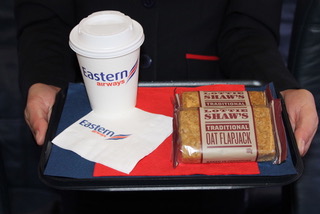 The team at a West Yorkshire based bakery are celebrating after it was annoucned that their new Granola Breakfast Bar will now be part of the new cabin breakfast snack basket service for Eastern Airways’.

Both family run Lottie Shaw’s Focused flapjacks and breakfast bars will now be available to passengers on board its Flybe Franchise services from August 2019 as part of a drive to offer passengers artisan products from regional producers.

The traditional rolled oat flapjacks and the new recipe granola breakfast bar; which is packed with seeds and apricots, are baked by the award winning bakery in Brighouse, near Leeds.

Winning awards both regionally and nationally for their products which are based on 100 year old family recipes, the firm has been credited as ‘The Authentic Taste Of Yorkshire’ and their range of traditional cakes, tray bakes and biscuits are stocked at farm shops and independent retailers nationwide.

Amanda Clark, Eastern Airways’ Head of Cabin Services and Training, said: “As a UK regional airline, we are working closely with many local businesses in an effort to ‘go local’ with our complimentary on board products.

“We are very pleased to be able to work with Lottie Shaw’s who are providing tasty flapjacks and granola bars for our snack basket, which our cabin crew will offer to passengers during flights as part of the service.”


Charlotte Shaw, Director of Lottie Shaw’s, said: “We are very proud to have our traditional oat flapjacks and new ‘breakfast bar in your pocket’ granola bars available to customers aboard Eastern Airways’”.

“In an era when so many of us can skip breakfast altogether because we’re in a rush or on an early morning commute, it’s great to have an artisan breakfast, handmade with wholegrain honey oats, omega rich seeds and apricots offering an energy hit that could last you until lunchtime. I’m particularly pleased to hear that our products will feature on flights from our local airport Leeds Bradford.”

Yorkshire and Humber region based Eastern Airways is an independent airline that was formed in 1997, and as well as providing flights from Leeds Bradford, it also operates services from airports including Aberdeen, Anglesey, Cardiff, Humberside, Newcastle, Norwich, Paris Orly, Rodez, Scatsta, Southampton, Sumburgh, Teesside International, Warton and Wick John O’Groats.

For more information and to but Lottie Shaw’s products online visit www.lottieshaws.co.uk