Salmon specialists JCS Fish are celebrating after winning another award for its BigFish Brand™ at the recent ‘FreeFrom Food Awards’ in London. 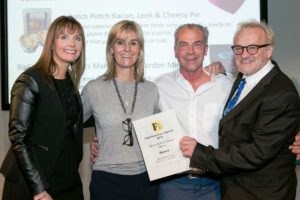 BigFish Brand’s Salmon with Garden Mint was declared the 2016 winner in the ‘Meaty and Fishy Ready Meals’ category and were presented with the coveted award by chef Antony Worrall Thompson at the glittering ceremony.

Founded in Grimsby in 2000 by husband and wife team Andrew and Louise Coulbeck, the firm specialise in prepared salmon and other seafood products for the retail industry under its own award-winning BigFish Brand™ and is also a major supplier of salmon to the catering industry.

Louise said; “We are absolutely delighted to have received this further recognition which we think proves that BigFish Brand has some of the best salmon dishes around!  It’s great news for our Grimsby team and for our growing business.”

The FreeFrom Food Awards recognise the best British food products that are free from gluten, soya, additives and other allergens.

The new award is just the latest accolade awarded to the product having already taken home awards in the Deliciouslyorkshire Taste Awards in 2010, The Grocer Magazine’s New Product Awards in 2014 and a Great Taste Award last year.