A local dessert business have rounded off an award winning year by winning the ‘Local Producer of the Year’ accolade at the inaugural Living North Awards. 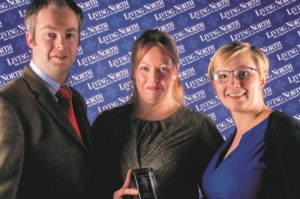 Burtree Puddings, scooped the award as part of the glittering ceremony organised by the popular magazine which took place at St Nicholas Cathedral in Newcastle.

The awards celebrated a number of areas including, food, retail and attractions in the North and come hot on the heel of the businesses ‘Best Free From’ category win for their Sticky Toffee Pudding at the Deliciouslyorkshire Taste Awards back in October.

Beating off some stiff competition from a number of local businesses along the way the evening was made even more special by the Burtree’s Sticky Toffee and Golden Syrup Puddings being used as part of the events menu.

Owned and operated by husband and wife team Robert and Lea Darling alongside their daughter Sarah, son Andrew and his wife, Nicola, every product from Christmas pudding to Sticky Toffee Pudding to Flapjack is made on the family farm and sold bother regionally through a number of farmers markets, food events and farm shops as well as internationally.

Lea Darling, Director at Burtree Puddings commented; “We are all a little gobsmacked at the moment, to win one big award in a year is fantastic but two is just outstanding. It makes all the hard work worthwhile and makes us incredibly happy that everyone else likes our puddings as much as we do. We’re not sure how we are going to top this for 2016, but for now we are looking forward to a rest over the festive period!”