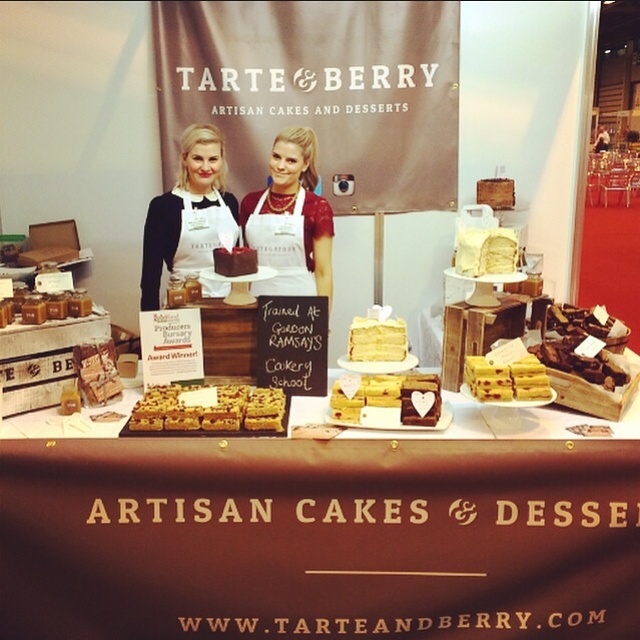 Newcomers to the Yorkshire food and drink scene Tarte and Berry are already gaining fans and a glowing reputation for their luxurious cakes and bakes.

Made up of sister duo Jane and Lucy Batham the girls not only have fantastic baking skills but the practical marketing know-how, that’s helped the Tarte and Berry brand win awards and recognition from the industry in just a few short months.

Jane is the culinary mastermind behind the brand and a Cordon Bleu trained chef.  She trained at The Tante Marie Culinary Academy in Surrey and went on to work in London as a pastry chef but she always knew that she wanted to start her own business.

Younger sister Lucy and resident chocoholic holds the title of chief taster and has a background in marketing and PR, counting Asda as a client in her previous role.

Tarte and Berry became members of Deliciouslyorkshire just a few months after starting up.

Jane says “We wanted to be part of a food and drink network and that was what we felt Deliciouslyorkshire offered us. As well as selling at shows, being able to get together and network with other Yorkshire food and drink businesses is really important for a relatively new business like us.”

The core Tarte and Berry range is based around a collection of brownies and tray bake bars which can all be delivered by post.

Jane says “When we started we knew that we wanted the business to have an online element, so it was a case of working out which cakes would make it through the post in the same condition that we posted them. We experimented by sending different cakes to each other, which was a lot of fun!”

So far Tarte and Berry’s best seller both online and at shows are their decadent and delicious Salted Caramel  Brownies,  made using their own homemade salted caramel.

Tarte and Berry’s first event was Harrogate Autumn Flower Show in September 2014, since then the girls have spent their weekends taking Tarte and Berry to a number of different food festivals, markets and lifestyle events and they aim for 2015 to be even busier with over 15 shows already in the calendar.

As well as selling their signature bakes and online range, the shows really allow Jane’s culinary skills and flair to shine, creating show stopping cakes to be sold by the slice and limited edition treats such as the Rhubarb Crumble bar they created especially for Wakefield Rhubarb Festival.

In just a few short months Jane and Lucy have picked up several awards, recognising the hard work and passion that they put into the business.

Winning the competition is seen by the girls as one of Tarte and Berry’s biggest achievements to date alongside counting TV presenter Phillip Schofield as one of their fans.

Lucy says: “We were sending samples of our brownies out to magazines and bloggers across the UK and we’re big fans of his so we thought it would be fun to send him some brownies in the post too. A couple of days later he Tweeted us to say thank you and he thought they were amazing, which we were thrilled about.”

Plans for the future…

As well as their online customers and selling at events Tarte and Berry products are also stocked in a number of local Yorkshire retailers and cafes including Mrs Athas in Leeds, Pudding and Pie in York and Fodder in Harrogate who stock Tarte and Berry’s gluten free range.

Jane says “We’ve got a handful of really supportive local trade customers who order regularly from u and we are looking to expand our wholesale base in the near future’.”

In addition to their baked treats Tarte and Berry are in the process of developing their caramel sauce used in their bestselling brownies for the retail market.

Lucy says ”We’ve had great feedback about the sauce and we’ve already been selling it at shows, but our plan is to upscale production and target high end retailers like Fenwicks, Selfridges and Harvey Nichols.”