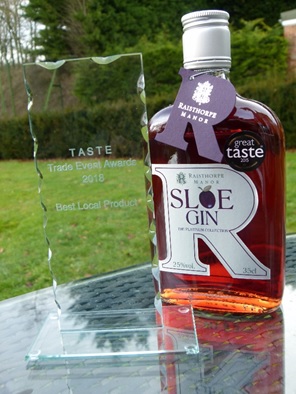 A Yorkshire Wolds gin producer are celebrating after winning an award at the inaugural Taste Trade event in York.

Raisthorpe Manor, who produce a range of flavoured gins an liqueurs form their base in Thixendale on the edge of the Yorkshire Wolds were awarded the top honour in the Best Local Product category at the event at York Racecourse on 24th January for their Sloe Gin.

The gin, which is produced using a traditional, age-old family recipe was commended by the judges for its fruit filled taste.

Best served mixed with Champagne or prosecco, or simply over ice, Raisthorpe’s Sloe Gin is available to buy online at www.raisthorpemanor.com or at independent retailers throughout the region.