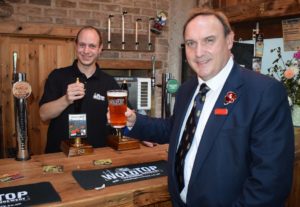 Wold Top Brewery’s new light beer called Remember, will be available at selected pubs in North and East Yorkshire from the 1st to the 13th November; the period known as Remembrancetide.

For each of the 54 casks sold, the Wold Newton based brewery will donate £10 to the Poppy Appeal.

The Poppy Appeal is the Royal British Legion’s biggest fundraising campaign and is held annually in November. During this month, events are organised throughout the UK to remember the fallen servicemen and women killed in conflict.

Money raised from the appeal supports the work that the Royal British Legion does to help the Armed Forces community.

Brewery director Gill Mellor said they hope the new beer, a light golden, crisp and clean beer with hints of fruit and spice, will be a hit.

“We would like to encourage as many people to join us in enjoying a great beer that will benefit the Poppy Appeal during Remembrancetide.”

The hope is that publicans will also have a collection tin on the bar to boost funds, added Gill.

Remembrance Sunday falls on 13 November and this year the Royal British Legion is marking the 100th anniversary of the Battle of the Somme, one of the most famous battles of the First World War.

“We hope to raise a record amount during this year’s Poppy Appeal to continue supporting all generations of the Armed Forces and their families.”

Wold Top Brewery has produced beers from its farm based brewery since 2003. The range is available in pubs, restaurants, shops and delis throughout North and East Yorkshire, with a select range sold through national retailers.