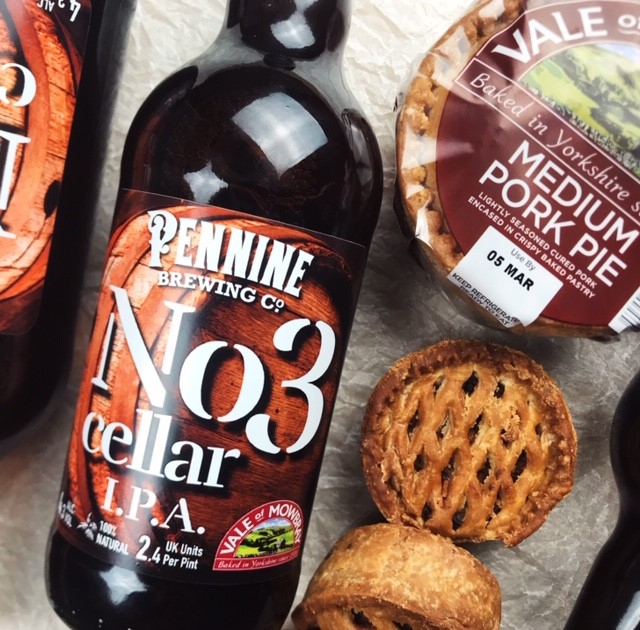 Pennine Brewing, based in the village of Well, just outside of Bedale, have produced a one-off run of beer in honour of the Leeming Bar based, Vale of Mowbray.

The Vale of Mowbray site has been producing Pork Pies since 1928, but prior to this they operated as a brewery. The team at Pennine conducted research into recipes that would have been brewed prior to the 1920’s change in production from ale to pork products at Vale of Mowbray, and the result is a traditional India Pale Ale (I.P.A) with an ABV (alcohol by volume) of 4.3%.

The unique beer has been named ‘No:3 Cellar’ after the tasting cellar which was part of the original Vale of Mowbray brewery, and will be released to coincide with British Pie Week which begins on 2nd March.

Jason Crowe, head of marketing at Vale of Mowbray said, “It’s great to see the torch of brewing quality beer in North Yorkshire, is being carried forward by Pennine Brewing. We felt honoured that Pennine wanted to shine a light on our history by sharing our story through this wonderful collaboration, plus, the opportunity of working with local businesses is something we really enjoy.”

Tim Butler, Head Brewer at Pennine Brewing added, “As members of Deliciouslyorkshire this was an amazing opportunity to research the rich brewery history that the Vale of Mowbray had, whilst being able to pay tribute to their original beginnings. We recreated their traditional IPA recipe by using the grain and hops available at the time whilst adding a 21st century twist!’

The resulting beer, ‘No:3 Cellar’, has been bottled as well as been put in cask and will be available in both shops and pubs up and down the Pennine route from 2nd March.